Banky W and Femi Kuti have slammed the federal government for giving N27bn to the National Assembly for renovation after slashing education and health budget.

In the revised budget, the National Assembly complex renovation budget was reduced to  N27.7bn (a reduction of 25.1 per cent) while the Basic Health Care Provision Fund which will take care of the welfare of all primary healthcare centres across the 774 local government areas in the country, was significantly reduced by N44.4bn to N25.5bn (a decrease of more than 42.5 per cent).  The Universal Basic Education fund was also reduced from N111.7bn to N51.1bn (a reduction of more than 54.2 per cent).

Reacting to this, Banky W who contested for a seat in the House of Representatives in 2019 described Nigerian leaders as “heartless”. He also averred that while people are starving, the national assembly thinks it is okay to spend N27bn on renovation.

At a time when most Nigerians are seriously struggling with being able to afford everything from FOOD to Healthcare, our National Assembly is going to spend N27 BILLION on “renovations

EDUCATION BUDGET? CUT BY 55% BASIC HEALTHCARE PROVISION FUND?? CUT BY 42.5%! People are starving! And our National Assembly thinks it’s okay to spend N27 BILLION on Renovations of their complex!?! This is HEARTLESS! Our Reps & Senators should PLEASE come and explain this to us. 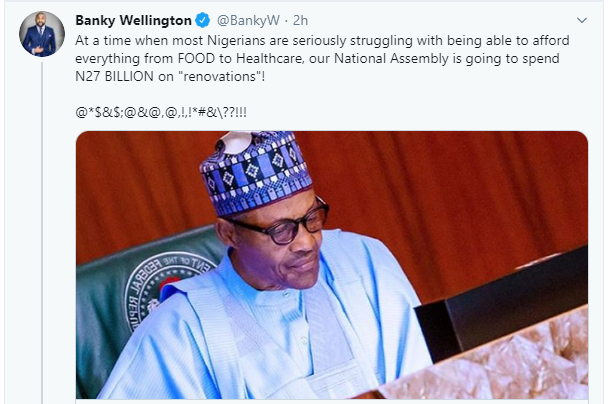 Femi Kuti in his tweets, alleged that same thing occurred in 1999. According to him, lawmakers fought for furniture allowance of N25m each instead of making healthcare , education, electricity, roads their priority.

Same they did in 1999 ( and forever ), they fought for furniture allowances 25m each instead of making healthcare , education,electricity, roads their priority ,what they were voted to do.

They’re cutting healthcare that’s in a BAD state that covid19 exposed . When they are sick they will run to Europe, UK and the USA and leave the masses to die in the horrible state they leave our hospitals. 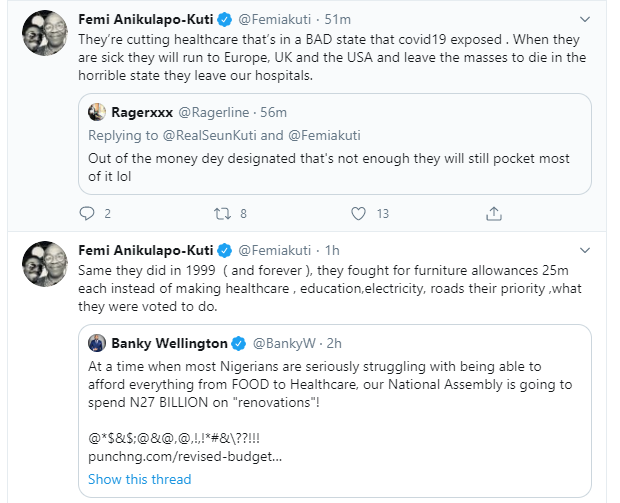