May 09, 2021
Home Sports ‘I am happy at the club contrary to some people who want to be in the news’ – Mourinho fires back at Paul Merson after the ex Arsenal ace said that he was unhappy at Tottenham

Tottenham coach, Jose Mourinho has refuted claims that he is regretting taking the job at the Tottenham Hotspur Stadium with Spurs sitting in sixth place in the Premier League.

Mourinho fired back at Paul Merson after the former Arsenal man suggested that he was unhappy at Spurs.Though he admitted he is handling a difficult job, at Tottenham, but he however said he wouldn’t be at the club if it was an easy job.

Jose Mourinho was sacked by Manchester United in December 2018 after a string of poor results and was left without a job till a couple of months ago when Tottenham sacked Mauricio Pochettino.

Mourinho took Tottenham from the brink of a relegation battle to within sights of a champions league spot but there are new rumours of a fallout between Mourinho, Tanguy Ndombele and Jan Vertonghen. 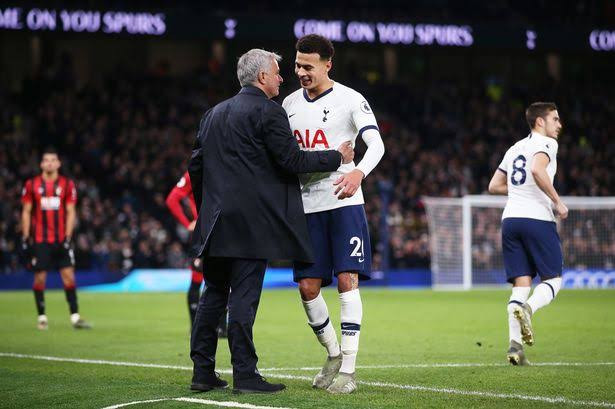 However, Mourinho has rejected any notion of unrest in the dressing room, and revealed that he is already looking ahead to pre-season to make Tottenham a cup winning team again.

“Contrary to some people who want to be in the news and tell things that are not true – I am really happy at the club,” he told Sky Sports Monday.

“You know me quite well, enough to know that I am really happy. Difficult? Yes, but if it was not difficult it wouldn’t be for me.

“I like the players and who they are. I like very much the relationship I have with them. If you see a bad face from me it is because of a bad result. I cannot change myself.

“That’s just me. The reality is that I am happy and I look forward to what is coming, and even more for what is coming next season. I want to start working with them in July.”

”I said when he went there it would give them a lift and there would be a charm offensive – and he was all smiles for a while,” he wrote for the Daily Star.

“But everyone knew it wouldn’t last, didn’t they? He’s gone back to being Grumpy Mourinho again. And I don’t see how he’s improved them at all. Not one bit.

“He looks like he’s thinking: ‘What have I done coming here?’ You don’t see him high-fiving ball boys now do you?”

“Mourinho is only there to get them into the top four. I can’t see Daniel Levy wanting to win the FA Cup but not get back into the Champions League.

“But it’s not really working, is it? Chelsea are in the driving seat to finish fourth and I can’t see Spurs catching them right now.

They are a very lucky football team at the moment because they’ve been ripped to shreds in their last two matches but still managed to win.”

“Things seem different now. It’s starting again, isn’t it? All the issues he had at United. He’s having them at Spurs now.

“I don’t think it will work for him there. That Southampton game was like an end-of-his-Old-Trafford-reign performance.”