April 08, 2020
Home Sports ‘I’m not trying to embarass the club’ – Paul Pogba’s agent Mino Raiola refuses to back down in war of words with Man .U. manager Ole Solskjaer

Super agent Mino Raiola has refused to back down in his attacks towards Manchester United manager Ole Gunnar Solksjaer claiming he only talked about the Man United manager because the manager always talked about him when the topic of his client Paul Pogba was brought up,

On Monday night, Raiola, one of the richest sports agents in the world posted a set of expletive tweets aimed at Solksjaer stating that Pogba didn’t belong to anyone or wasn’t ‘a prisoner’, after Solskjaer said to reporters that Paul Pogba belonged to Manchester United and not his agent Raiola. (If you missed the story, read HERE ) 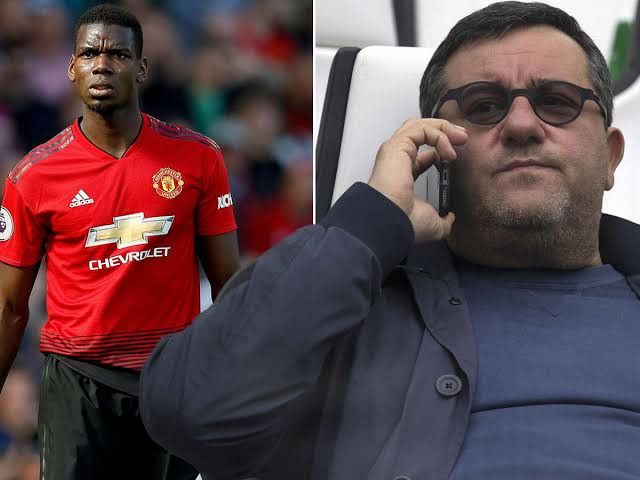 Solksjaer, after Monday night’s win against Chelsea responded to Raiola’s twitter rant saying he wouldn’t respond to the divisive agent on social media.

Raiola defended his earlier statement, claiming Solskjaer had misconstrued his previous words about Pogba and the possibility of returning to Italy.

Mino Raiola refused to back down in his war of words with Red Devils boss Ole Gunnar Solskjaer saying he had no intention to drive a wedge between Pogba and Manchester United.

Pogba, recovering from ankle surgery, has not played for United since Boxing Day with his comments last summer suggesting he was tired of playing for Manchester united, but Raiola insists he did no wrong talking about his client and that Pogba was only focused on Man United for the season.

I thought what Solskjaer said was out of line because he took parts of sentences of an interview of mine and acted a bit, let’s say, offended that I was offering Paul to other clubs,” Raiola told talkSPORT on Tuesday.

“I was asked if Paul would fancy Italy, I said it was his second home, as it is for (Zlatan) Ibrahimovic, but that is not the case – now he is focused on Manchester United.

“I have been asked something, I haven’t said something. Would he like Italy? I was just answering as Mino Raiola I am not allowed to do that?

“I’m not allowed to talk about players I represent because they are owned by Manchester United or Barcelona or Juventus?

“I don’t think it was inflammatory. He (Pogba) is committed only to Manchester United and the European Championship this year, after that we will talk to the club if necessary.

“I said that in Italy and am saying it now – all the other things is just a bunch of bull****.”

“I have never spoken about Ole in the papers or the press,” he said.

“He always talks about me if I talk about (Erling) Haaland, or Paul Pogba’s injury or surgery, he is always talking about me.

“I have the right to an opinion and the right to represent players the way I want. I was not talking about Ole and Manchester United.

“It can be my opinion that his comments about an article that actually said that Paul is committed to Manchester United was taken out of context.

“The only focus there is to get back into the team as soon as possible and focus on making a good end of the season at Manchester United.

“I’m not publicly trying to embarrass the club. I don’t see where I have embarrassed the club. I have not offended Manchester United, their owners or fans in any way.”

Danelle: It's not saying that audit is much easier compared to other tasks, but it simply...

Dorothy Wagner: I just couldn't depart your website before suggesting that I extremely enjoyed t...