In his speech, Dr. Momoh applauded the administration’s efforts at providing a more business-friendly environment and commended the bodies and reforms set up towards nurturing same. He however bewailed the apparent disconnect between policy discourse and problem-solving policy actions that hamper these efforts, urging government to be decisive and swift in resolving them. He also charged Government to improve on its body language to preserve the trust of its citizens and dispel the cynicism that inhibits citizen engagement and commitment.

The Unilag Alumni President reinforced a recommendation earlier brought forward by his predecessor in office, the Olor’ogun Dr. Sonny Kuku, for a policy to drive the country’s Institutions of Higher Learning to harness their intellect and resources towards offering resourceful answers to the Nation’s challenges by way of inventions, breakthrough research and others, thereby reducing the burden on the Federal Government. 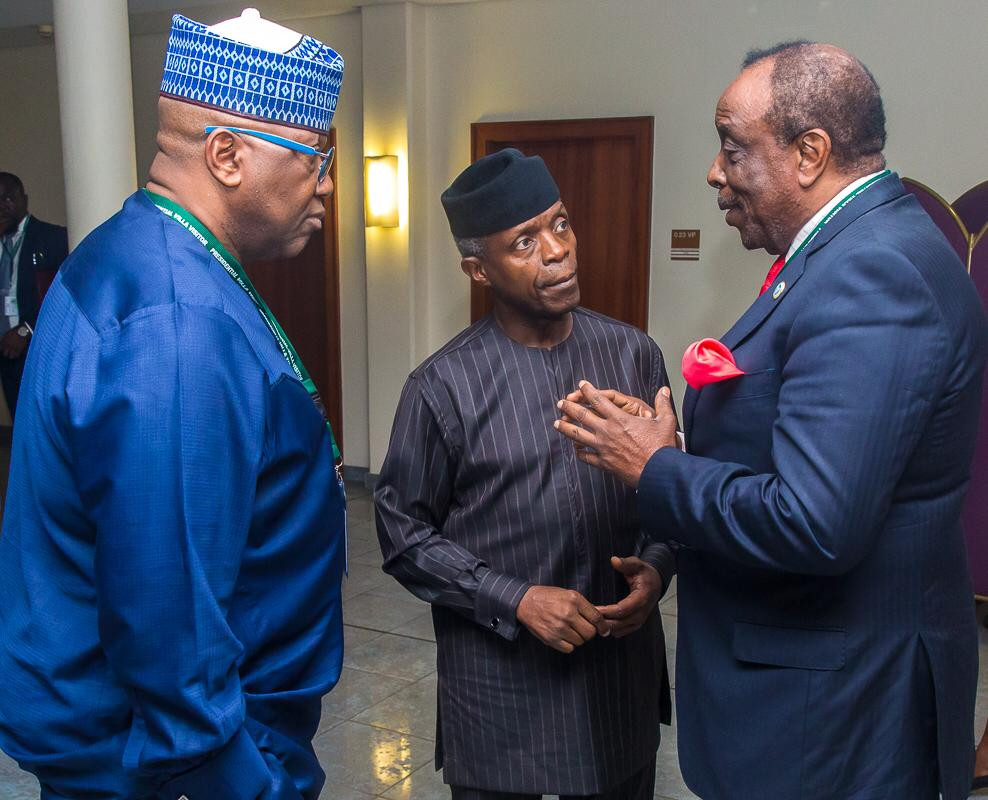 The Vice President, Prof. Yemi Osinbajo,with Unilag Alumni President, Dr. John Momoh, and Immediate Past President of the Association, The Olor’ogun Dr. Sonny Kuku, OFR, FAS
He reminded the VP that the challenge of accommodation for students persists on campus. He said the Alumni Association was planning to build a 500 -bed space hostel and invited the VP’s involvement both in his personal and official capacities.

On a festive note, he mentioned that the Alumni Association will mark its 50th anniversary in October and that a grand event was being planned to mark the occasion. He invited the VP as the Special Guest of Honour.

In conclusion, the Alumni President thanked the VP for his time and attention and reassured the Vice President of the support and contributions towards further developing the country. He also offered the prayers of the Association in these trying times for the Nation.

Responding to the submissions of the Alumni President, the Vice President, Prof. Yemi Osinbajo, also an alumnus of the University of Lagos, expressed his appreciation for the visit. He commended the leadership of the Alumni for positioning the Association, such that it compared with the very best in the world. He applauded the representation from across the country and stated that he saw it as a testimony to Unilag Alumni’s forward–looking appeal. Describing Unilag an exemplar in diversity and a testament of the kind of phenomenon Nigeria yearns for.