47-year-old Nigerian man Amos Paul Gabriel, involved in a scheme to swindle Citibank in New York City has been jailed and fined by a Singapore court for money laundering and other offences. See LIB reports on the Agulu born, Anambra businessman

Gabriel, a Singapore permanent resident, was sentenced to three years’ jail and fined $4,200 last Thursday, May 16.  He had also pleaded guilty to driving without a licence, and was handed a one-year driving ban.

The money laundering case made headlines in 2009 when Amos was indicted in New York on charges of scheming to steal from a National Bank of Ethiopia (NBE) account at Citibank.

Amos and his co-conspirators had in 2008 sent fake signed documents to Citibank appearing to match signatures of officials at NBE, Ethiopia’s central bank.

Citibank transferred US$27.2 million (S$37.2 million) to various accounts before the fraud was discovered.

Details of the elaborate scheme to launder the stolen money were heard at Singapore’s State Courts.

Amos, who was married to a Singaporean woman, received a call from his Nigerian friend Robert Umohette in 2008, asking him to provide a bank account for the transfer of the cheated proceeds.

Instead of using the account of his own company, Amos discussed the matter with a friend in Australia named Mohammad Sohail, also known as Malik.

They agreed to use the bank account of Malik’s company to receive the funds, on the condition that Amos received a cut of the cheated funds as commission, said Deputy Public Prosecutors Kelvin Kow and Shamini Joseph.

A total of US$27.2 million was transferred via Citibank from the corporate account of NBE to accounts in the US, Australia, Japan, China, Hong Kong and Korea as part of the broader money-laundering scheme. 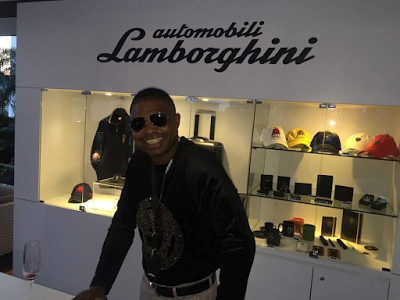 The US$669,509 that was laundered into Singapore was seized from the relevant bank account by the Commercial Affairs Department, and returned to Citibank in 2010.

A further sum of about S$35,000 was recovered from Amos during investigations, and he paid another S$100,000 in restitution.

In October 2016, he had driven a blue Lamborghini dangerously on East Coast Parkway, overtaking a van at high speed. The father of the van driver made a police report.

Amos was later found without a valid driving licence in Singapore. He had a licence issued by the Federal Republic of Nigeria, but had not converted it within three months of obtaining his Singapore PR status.

On the money laundering charges, the prosecution called for Amos to be punished appropriately.

“Your Honour knows how important it is to protect Singapore’s reputation as a clean and trusted financial centre,” said the prosecutors. “We must stand strongly against the scourge of money-laundering. The accused must be punished appropriately, so as to deter others from trying to launder money in Singapore.”

This is the Official YouTube Channel of David Oyedepo Ministry Int’l. To reach out t…

Darcy Tancred: Good day! I could have sworn I've been to this website before but after browsing...

Tamika Cintron: Terrific article! This is the type of information that are supposed to be shared...

Enriqueta Almond: May I simply say what a comfort to uncover someone who truly knows what they are...